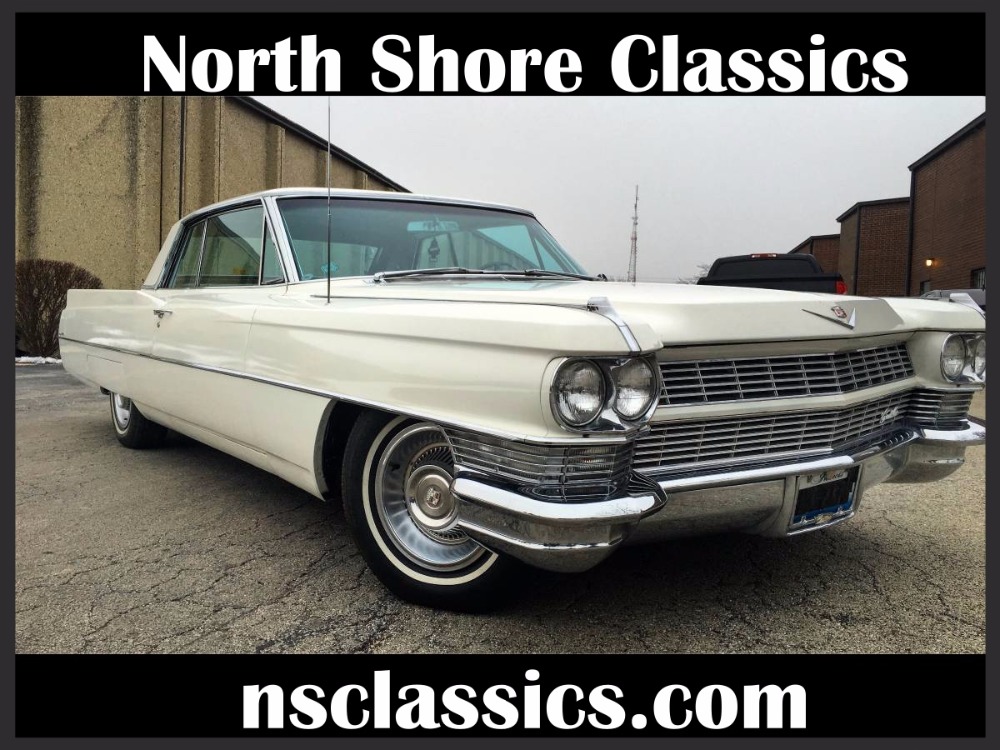 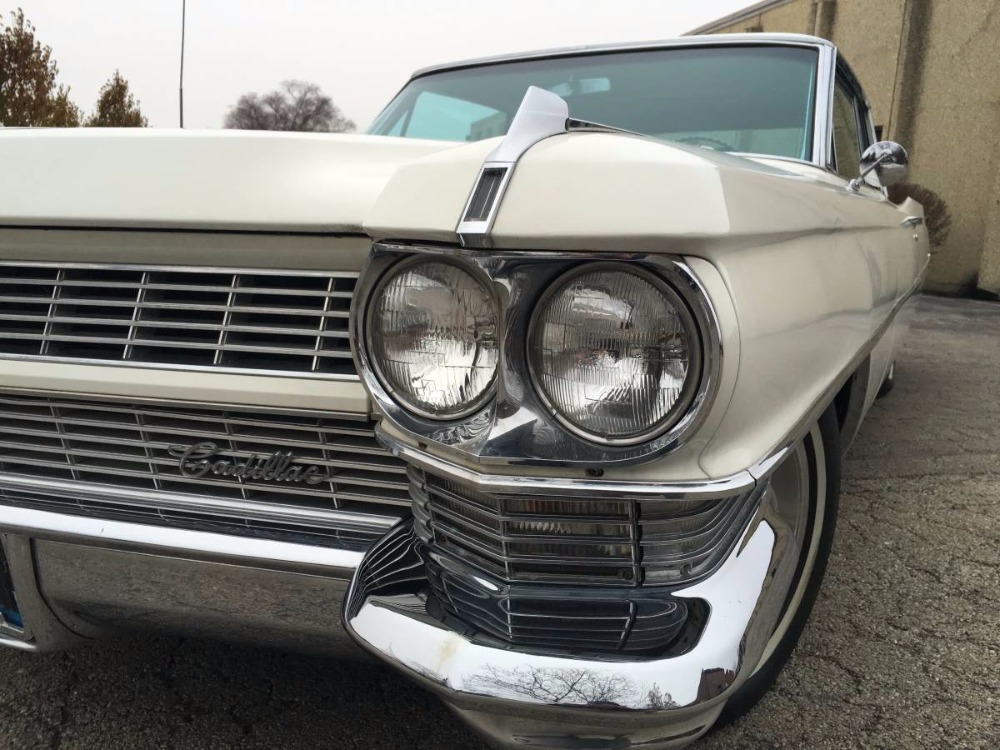 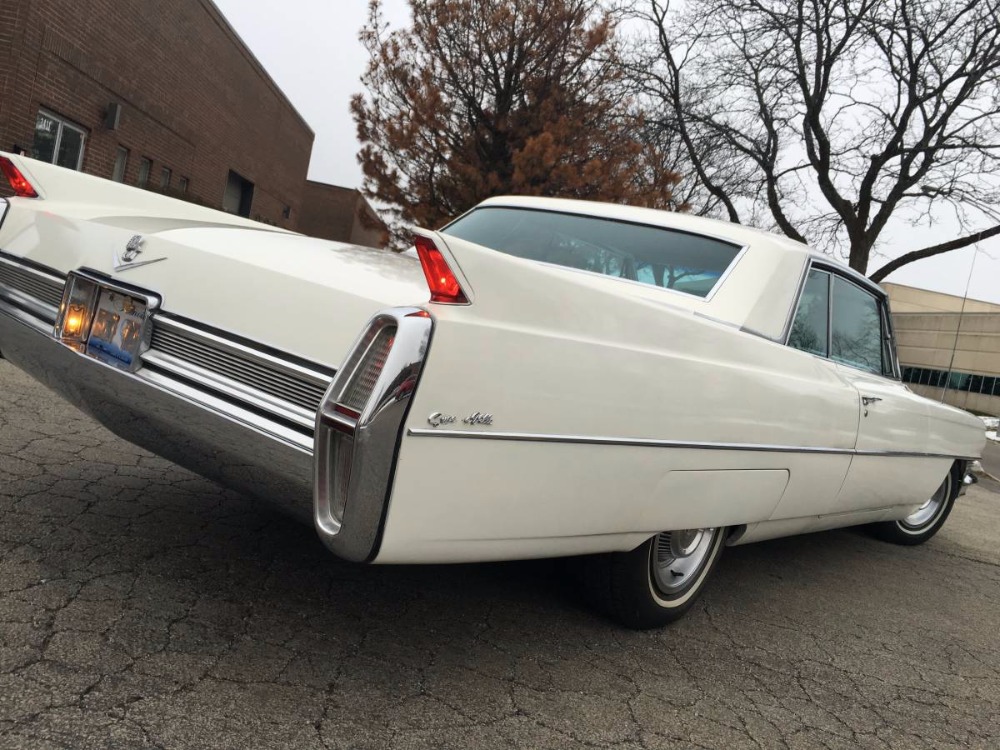 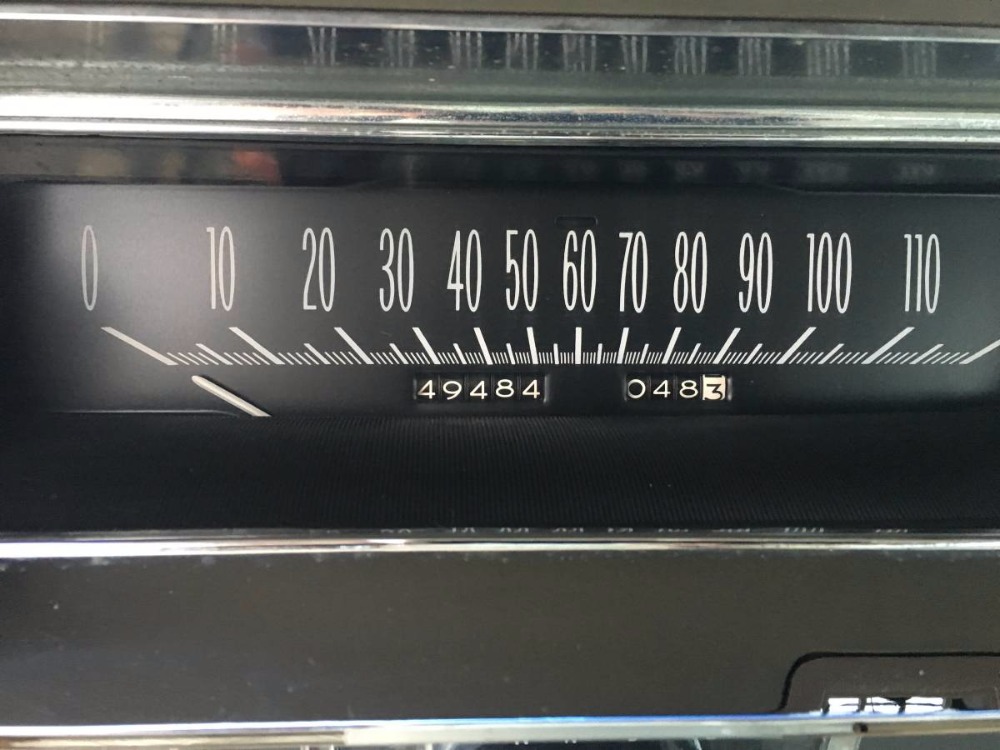 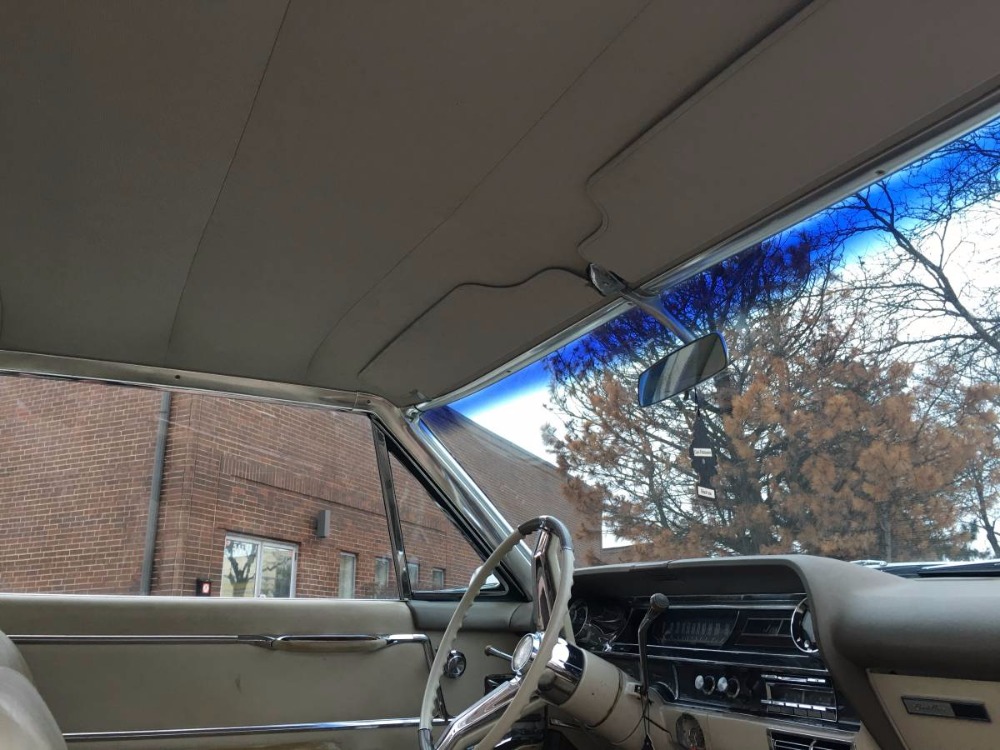 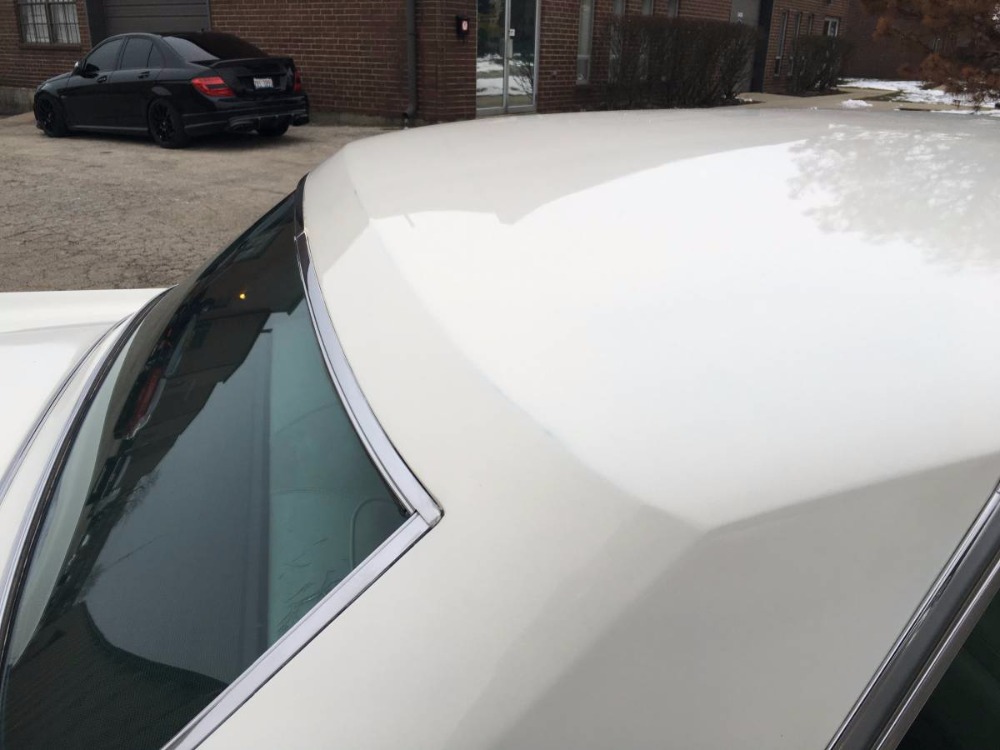 1964 Cadillac Coupe Deville
49,000 Miles on odo
Original Numbers Matching
429 V8 Engine
Automatic Transmission
Power Steering
power Brakes
Repainted in 2008
White exterior
Good exterior Chrome trim
There is some minor surface rust on undercarriage
Tan interior
There is a small tear in the passenger side seat and a crack on the dash
Cloumn Shift
All gauges are working
Heat/ Defrost
A/C is currently not working
AM/ FM Radio

Car is local - call for appointment

The name "DeVille" is derived from the French de la ville or de ville meaning "of the town".[1] In French coach building parlance, a coup de ville, from the French couper (to cut) i.e. shorten or reduce, was a short four-wheeled closed carriage with an inside seat for two and an outside seat for the driver and this smaller vehicle was intended for use in the town or city (de ville). An (unshortened) limousine or (in the United States) town car has a division between the passenger and driver compartments and if the driver's seat is outside it may be called a sedanca de ville or town car

The first Cadillac "Coupe de Ville" was shown during the 1949 Motorama. It was built on a Cadillac Sixty Special chassis and featured a dummy air-scoop, chrome trim around front wheel openings, and a one-piece windshield and rear glass. The interior was black and trimmed in gray leather, including the headliner, to match the roof color. It was equipped with a telephone in the glove compartment, a vanity case and a secretarial pad in the rear armrest, power windows and highly decorative chrome interior trim. The prototype "Coupe de Ville" was used by GM President Charles E. Wilson until 1957 when he presented it to his secretary.[2] At some time during this period it acquired a dark Vicodec roof. The prototype "Coupe de Ville" was still in use as of 1976.

The Cadillac Series 62 Coupe de Ville was introduced late in the 1949 model year.Along with the Buick Roadmaster Riviera, and the Oldsmobile 98 Holiday, it was among the first pillarless hardtop coupes ever produced. At $3,496 it was only a dollar less than the Series 62 convertible, and like the convertible, it came with power windows standard. It was luxuriously trimmed, with leather upholstery and chrome 'bows' in the headliner to simulate the ribs of a convertible top. In its first year the Series 62 Coupe de Ville only sold 2,150 units. But 1950 sales more than doubled to 4507, and in 1951 sales more than doubled again to 10,241 exceeding the sales for the Series 62 Club Coupe that year. Also, in 1951, Coupe de Ville chrome script appeared on the rear roof pillar for the first time, to further distinguish it from the Series 62 Club Coupe.

In 1956 the Series 62 Coupe de Ville was joined by the Series 62 Sedan de Ville, Cadillac's first standard production 4-door hardtop. Similarly to the Coupe de Ville, it was also more expensive and more luxuriously trimmed that the standard 4-door Series 62. With 41,732 sold, it also easily outsold the Series 62 sedan in its very first year. Given their sales success, it was only natural that the Coupe de Ville and Sedan de Ville were moved to their own separate series in 1959, the Series 6300, being joined by a DeVille convertible in 1964.
Second generation (19611964)
Cadillac was restyled and re-engineered for 1961. The new grille slanted back towards both the bumper and the hood lip, along the horizontal plane, and sat between dual headlamps. New forward slanting front pillars with non-wraparound windshield glass were seen. The revised backlight treatment had crisp angular lines with thin pillars on some models and heavier semi-blind quarter roof posts on others. DeVille models featured front series designation scripts and a lower body "skeg" trimmed with a thin, three-quarter-length spear molding running from behind the front wheel opening to the rear of the car. Standard equipment included power brakes, power steering, automatic transmission, dual backup lights, windshield washer, dual speed wipers, wheel discs, plain fender skirts, outside rearview mirror, vanity mirror, oil filter, power windows and 2-way power seats. Rubberized front and rear coil springs replaced the trouble prone air suspension system. Four-barrel induction systems were now the sole power choice and dual exhaust were no longer available. A new short-decked four-door Town Sedan hardtop appeared mid-season.

A mild face lift characterized Cadillac styling trends for 1962. A flatter grille with a thicker horizontal center bar and more delicate cross-hatched insert appeared. Ribbed chrome trim panel, seen ahead of the front wheel housings in 1961, were now replaced with cornering lamps and front fender model and series identification badges were eliminated. More massive front bumper end pieces appeared and housed rectangular parking lamps. At the rear tail lamps were now housed in vertical nacelles designed with an angled peak at the center. A vertically ribbed rear beauty panel appeared on the deck lid latch panel. Cadillac script also appeared on the lower left side of the radiator grille. The short-deck hardtop Town Sedan was moved from the DeVille series to the Series 6200, being replaced by a short-deck Park Avenue.[6] In addition all short deck Cadillac models went from being 6-window sedans in 1961 to 4-window sedans in 1962 and 1963. Standard equipment included all of last years equipment plus remote controlled outside rearview mirror, five tubeless black wall tires, heater and defroster and front cornering lamps. Cadillac refined the ride and quietness, with more insulation in the floor and behind the firewall.[7] DeVille sales as a separate series exceeded their sales level as a trim level for the first time ever at 71,883 units, or nearly 45% of Cadillac's total sales.

In overall terms 1963 Cadillac was essentially the same as the previous year. Exterior changes imparted a bolder and longer look. Hoods and deck lids were redesigned. The front fenders projected 4.625 inches further forward than in 1962 while the tailfins were trimmed down somewhat to provide a lower profile. Body-side sculpturing was entirely eliminated. The slightly V-shaped radiator grille was taller and now incorporated outer extensions that swept below the flush-fender dual headlamps. Smaller circular front parking lamps were mounted in those extensions. A DeVille signature script was incorporated above the lower beltline molding near the rear of the body. A total of 143 options including bucket seats with wool, leather, or nylon upholstery fabrics and wood veneer facings on dash, doors, and seatbacks, set an all-time record for interior appointment choices. Standard equipment was the same as the previous year. The engine was entirely changed, though the displacement and output remained the same, 390 cu in (6.4 l) and 325 hp (242 kW).

It was time for another facelift in 1964 and really a minor one. New up front was a bi-angular grille that formed a V-shape along both its vertical and horizontal planes. The main horizontal grille bar was now carried around the body sides. Outer grille extension panels again housed the parking and cornering lamps. It was the 17th consecutive year for the Cadillac tailfins with a new fine-blade design carrying on the tradition. Performance improvements including a larger V-8 were the dominant changes for the model run. Equipment features were same as in 1963 for the most part. Comfort Control, a completely automatic heating and air conditioning system controlled by a dial thermostat on the instrument panel, was introduced as an industry first. The engine was bumped to 429 cu in (7 l), with 340 hp (253.5 kW) available. Performance gains from the new engine showed best in the lower range, at 20 to 50 mph traffic driving speeds. A new technical feature was the Turbo-Hydramatic transmission, also used in the Eldorado and the Sixty Special. A DeVille script above the lower belt molding was continued as an identifier. This was the first year for the DeVille convertible. DeVille sales reached 110,379 units, accounting for nearly two thirds of all Cadillacs sold.